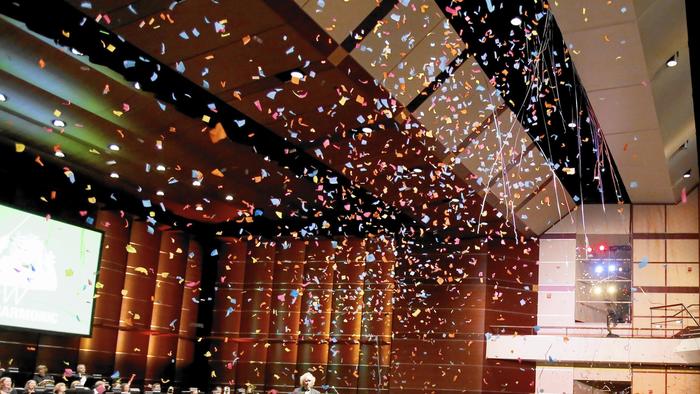 Celebrate New Year’s Eve with a young opera singer and a full orchestra.

New Philharmonic presents “New Year’s Eve with an International Twist” at 2, 5:30 and 9 p.m. Dec. 31 at The McAninch Arts Center at the College of DuPage in Glen Ellyn. The orchestra is under the artistic direction of conductor Kirk Muspratt.

The program features classical and pop works plus the traditional champagne toast. For the fourth year, 98.7 FM-WFMT will do a live broadcast of the 5:30 p.m. show.

Continuing the tradition of featuring soloists from the Lyric Opera Ryan Center for Young Artists, tenor Jesse Donner joins New Philharmonic. Donner is a Luminarts Foundation and Metropolitan Opera National Council award-winner who appeared in the Lyric Opera of Chicago production of “Nabucco” and will be singing in the upcoming “Der Rosenkavalier.”

This is Donner’s first time performing with the New Philharmonic and he’s looking forward to the New Year’s Eve shows. Muspratt recruited him after hearing him sing a year ago, Donner said.

Donner will be complementing the orchestra, he said.

“They have a good amount of music and I will try to fill in and make a somewhat cohesive theme,” he said.

The Viennese portion of the evening will include him singing “Freunde, das Leben ist lebenswert” from Lehar’s “Giuditta,” he said.

“The reason I love this song is because the translation is, ‘Friends, life is worth living,'” he said. “Heading into a new year I think that’s a very positive message. As the song goes on, I proceed to talk about all the beautiful things that you can experience in life. It’s very positive.”

Seeing as he is an opera singer, the next selection he will perform is “La fleur que tu m’avait jetee” from Bizet’s Carmen.

“It will just be me onstage, so the audience will just have to imagine that Carmen is there,” he said.

The third piece is the only one not done with the orchestra accompanying him: “Spring Waters” by Sergei Rachmaninoff.

“In the last day of December, it will be kind of an optimistic take, looking forward to spring and that time when the ice finally starts to melt and water starts flowing,” he said. “Obviously everything’s a metaphor for love, but the imagery is good for those native Russian speakers in the audience.”

For some fun, Donner said, they will do a Spanish piece made popular by Placido Domingo called “Granada.”

“I’m particularly excited to be doing that with the orchestra because it’s a lot of fun,” he said.

The pieces are challenging and he had to work hard to perfect them, he said.

“They’re incredible pieces and I try to bring my best to them,” he said. “They each have a good high point to them. Some are flashy and some are emotional. Hopefully, I elicit the proper response from the audience, even if they don’t speak the language I’m singing in.”

This is not only his first New Year’s Eve performance, it’s the first time he’s done three performances in one day, he said.

“I’m really excited about that. Any time you get to perform with orchestra is a great opportunity, especially for a young artists like myself,” he said. “You learn a lot during performance. Each live opportunity is new and special. I think I will be just as excited about the third performance as the first. I would say there’s no doubt about it.”

Donner, a Des Moines native, urges people to give opera a try.

“The tunes themselves are so – just the beauty of it – and if I’ve done my job right, the beauty of the voice and the orchestra together, I think, is not something that can be compared,” he said. “Music is a universal language.”

Annie Alleman is a freelance reporter for the Beacon-News.

Where: McAninch Arts Center at the College of DuPage, 425 Fawell Blvd., Glen Ellyn