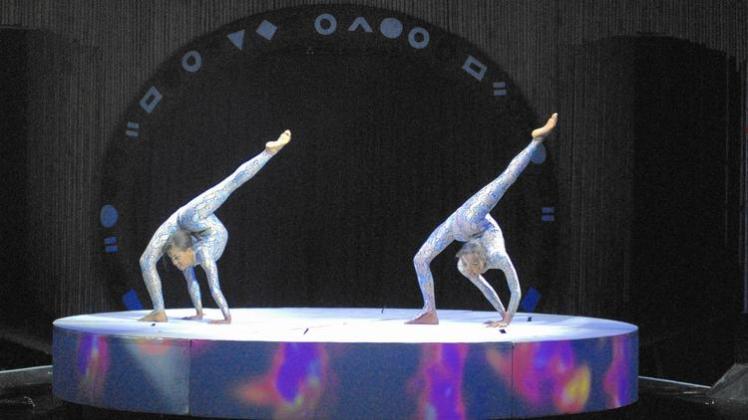 The upcoming season at the McAninch Center for the Arts in Glen Ellyn will feature African dance, the music of the Bee Gees, a finalist from “America’s Got Talent” and comedy from Second City.

The new season at The Mac, on the campus of the College of DuPage, represents what the people want, artistic director Diana Martinez said.

“We surveyed all of our subscribers and asked them what they wanted to see,” she said. “We put who was available on a big list, and then I kind of went down the list. My goal was obviously to create variety, and we’re always trying to bring in something new and different. I wanted a nice balance of entertainment and culture and family and comedy. When I book, I’m looking for what will appeal to this crowd, what will appeal to this crowd, and also how do I develop a new crowd and bring in other people.”

She knows she’s competing with Chicago theaters as well as some of the larger markets near Glen Ellyn for artists. It’s a challenge, and she does her best each year to bring in acts she thinks people will enjoy.

One act she’s particularly proud of getting is Colin Mochrie and Brad Sherwood from “Whose Line is it Anyway?” Their show, “Two Man Group,” is Dec. 12.

“I’ve actually worked with Colin; I’ve seen them before. He’s one of the most brilliant, quick-witted improvisers I’ve ever seen ever, anywhere. He’s really, really funny. He’s from Second City; he’s got that background. Colin Mochrie is just brilliant.”

Another act people may not have heard of but know the brand is Jessica Fellowes on Jan. 31.

“I’m very excited about Jessica Fellowes’ talk, ‘Behind the Scenes of Downton Abbey,’ because I’m a huge fan,” she said. “And that will be in time for the premiere of the finale season.”

She knows there is a big audience for jazz because of The Mac’s association with jazz radio station 90.9 FM WDCB.

Another show she said she’s excited about is African Footprint on Feb. 28.

“That was a really hard show to work out because they come from South Africa. The show is a celebration of the African influence on music and dance today. It starts out with tribal African drumbeat dance and goes into Victorian times and the gumboot rhythms they would share, and then it goes to ragtime, and then it goes all the way to hip-hop and modern day,” she said.

“It’s really powerful and very, very well-done. The first time the show was done, it was done for Nelson Mandela in prison. It’s about how they expressed themselves as a people culturally. I think it will be a beautiful show for African American history month.”

This show, above all others in the lineup, is one she urges audiences to take a chance on if they are hesitant.

Another show that is a personal coup and one that appeared on patrons’ top-get list was Los Lobos. Interestingly, the roots-rock, Grammy-award winning band from California is going to pair up with Ballet Folklorico Mexicano on Feb. 21 to celebrate Mexican-Americans’ contributions to American history in film, music and dance, she said.

Fans of dance will delight when Ailey II, the second company of the Alvin Ailey American Dance Theater, comes to town Oct. 18. Martinez personally requested they do a number from “Revelations,” one of their signature dance pieces.

In September, the Chairman of the Board is honored.

“I’m a huge Sinatra fan, and it’s his 100th birthday, so we have a tribute to him by Rick Michel,” she said. “Rick Michel is one of the longest-running Vegas acts. He really does a great job. That will be a fun night. Who doesn’t like Sinatra?”

Fans of magic and motorcycles should pay attention Oct. 24, when Mike Super, winner of NBC’s hit show “Phenomenon” and a finalist on NBC’s “America’s Got Talent,” performs.

“I watched him actually, and I was like, ‘Oh my God, he’s amazing,'” she said. “We’re looking for a motorcycle dealership to sponsor a motorcycle for the show, because he will do a trick where he will make a motorcycle disappear and re-appear, and there’s a trick with the VIN number and people’s driver’s licenses in the audience. If your numbers line up, you get the motorcycle. So we’re trying to find a Harley dealer to work with to sponsor this. Somebody could win a motorcycle.”

If you like to laugh, you’re in luck. There will be not one but two appearances from Second City Comedy. The first is the “Dysfunctional Holiday Revue” on Dec. 5, followed a couple of months later by “Hooking Up With The Second City” on Feb. 13.

“You can see Second City over and over again; they have so much material,” she said. “What I love about this Valentine’s show is that it is going to be all about relationships. The holiday one, the sketches are all about the trials and tribulations and stress we feel at the holidays, which is fun. It’s a great break when you’re in the middle of all that holiday stress.”

Martinez knows people can spend their entertainment dollars elsewhere, but she’s urging them to take a chance on The Mac.

“It’s convenient and close to home, and the venue is intimate with great acoustics,” she said. “I think we’re the world’s best-kept secret. And it’s 10 minutes, 20 minutes from peoples’ home, free parking, beautiful new venue, world-class entertainment. It’s an affordable value because you’re not paying for gas, you’re not paying to park, you’ve (got) reasonable ticket prices in this beautiful, 800-seat venue with no obstructed views, lots of leg room, full-service bar. It’s a pretty special opportunity that we have in our community.

“And one thing that sets us apart is that we always try to do something a little special and different. Like on Valentine’s Day — we give everybody chocolates as they walk out the door, and we have a champagne toast. Or our New Philharmonic Orchestra — every show, they have Cookies with Kirk. The conductor (Kirk Muspratt) and orchestra come out and mix and mingle and talk to the audience.”

Look for free “Mac Chats” after certain performances, where a faculty member will come out and give an interesting perspective about the music, artist or genre, she said.

“It helps you connect on a deeper level to what you are seeing, and I think you appreciate what you’re seeing more when you understand a little bit more about it. Our audiences really love those.”

It’s a performing arts center’s job to connect community and culture, she said.

“I think when you experience something live with people … I think it provokes conversation, it fosters relationships and understanding about different people, different cultures,” she said. “Sometimes people say, ‘I can’t believe they’re going to do a tribute band.’

“My answer to that is, there’s nothing like a Bee Gees band that’s going to bring people together more to have some fun and relax, that crosses all barriers and all political ties. It’s OK that we just have entertainment sometimes; that we just have fun, and we’re in a nostalgic place. I think that’s important to give the audience a blend of fun, and culture, and new experiences.”

The following performances will take place in the MAC’s Belushi Performance Hall:

Presented in partnership with 90.9 FM WDCB

Alleman is a freelance writer.

Tickets: Single tickets go on sale Aug. 15 in person at the box office or online on Aug.16 and by box office phone Aug. 18