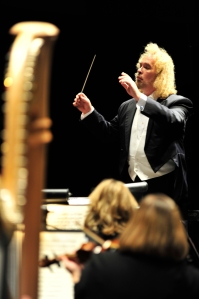 “For 10 years I’ve had the honor of working with the remarkably talented musicians of New Philharmonic and NP’s top-notch manager, Paula Cebula. I want to thank our audience members, the MAC and College of DuPage for helping to make this possible,” says Muspratt. “Throughout the past decade we’ve shared many magical musical classical, pop and opera moments so, having developed a bit of a reputation as a rebel, myself, I thought the best way to celebrate together would be with a concert featuring two of Beethoven’s greatest works.”

“The Ultimate Rebel – Ludwig Van!” will showcase two of Beethoven’s most well-known and revolutionary works:
• Beethoven’s Symphony No. 7, op. 92, in A major, said by Beethoven himself to be one of his best works;
• Beethoven’s extremely popular Symphony No. 5, op. 67, in C minor featuring a universally recognizable opening four-note motif that has been often used in multiple pop music genres as well as in film and television.
The program will also feature “Kirk’s Klassical Boot Kamp” where, with the help of musical excerpts and video clips, Muspratt will provide insight into the world of conducting.

The April 12 & 13 concerts will be proceeded by MAC Chats conducted by Steve Pierson in Room 140. And followingeach performance, the audience can enjoy cake and the chance to confab with Muspratt and members of the orchestra in the lobby

Tickets are $42 Adult / $40 Senior / $32 Youth. Parking is free. To order tickets, call 630.942.4000, or visit AtTheMAC.org. In accordance with NP’s mission to make classical music accessible for the next generation, NP is pleased to offer a special $10 ticket to kids age 15 and under for the Sunday, April 13, 3 p.m. matinee. (Ticket purchasers should mention code word KIDS when placing their order (by phone or in-person only).